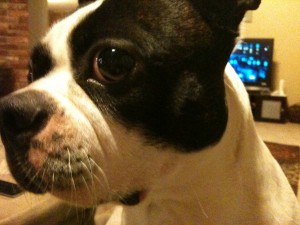 Their dog was bug-eyed, and one eye was lazy. It was a little absurd and only a tiny bit tragic, as she was otherwise an extremely sharp and charming little animal. It was as if her eyes, in puppyhood, had been straightly calibrated and set neatly and safely inside her skull, but a miraculous spectacle-or an unspeakable catastrophe- had unfolded before her and the limits of her tiny, beastie brain could not consume it and thus instructed her eyes to endeavor thrice as hard to take it all in for record and future rumination. The dark eyes, truly obedient, strained with heroic commitment until the skull heard their cry and, ever the helper, gave them a mighty push so that they could boast more surface and thus sponge the sight on a grander scale. In the straining and pushing the eyes lunged forth from the bone with a wet ‘ploop’ that starlted the young dear and she hastily swung her apple head ’round to where she thought the sound originated. Her bright eyes, still in transit, swung wildly with her head, careening against the edges of their vision. One reached the edge with a bounce and instinctually righted itself, but the far eye, bearing the brunt of the swing, hit the edge with a legitimate ‘thwick!!’ and, utterly dazed, bumbled about its boundaries without a wit. The little dog, remembering the miracle/catastrophe she had been religiously recording, snapped her chin back to position and the bewildered eye threw itself as close to center as it could find. The vision concluded itself hastily and the puppy did her best to send all her sightly seeings to the brain, but the eye was irreperably askew. So rapt, though, was the brain at the possibilty of thinking all the eyes had seen, and so fulfilled was the skull at having made the monumental assist and, bless them, so exhaustedly relieved were the eyes at their accomplishments, that none noticed the misdirected eyeball; all collapsed in the euphoria of their victory. Soon, as puppies do, the weeone plunged into sleep and, as puppies also do, awoke with no memory of the grand event and without a single thought of her adjusted eyeballity. There was only a small, flickering sense of incredulity lodged in her hard head, and, unable to shake it loose or rub it out, she accepted it and launched forth into her life according to this new, anonymous sense of unique fantasticality.